QUILL.exe: Transmissions from the Black presents an alternative science fiction setting for Quill: A Letter-Writing Roleplaying Game for a Single Player, wherein the characters are typing up transmissions to send from their deep space exploration/colony vessel. When used with the basic rules from Quill, this supplement provides six new characters, three new skills, and four new scenarios.

Take on the role of a Diplomat, Stowaway, Artificial Intelligence, Colonist, Engineer, or Captain! Plead with a recalcitrant Supply Officer, make First Contact with an alien vessel, negotiate with a Colony that you might call home,  leave a message of warning and hope to future explorers, and reach out to the one you left behind! Boost your signal strength, pick a subroutine to help you write, and start typing so that you can send your transmission across the void between stars.

Hopefully it gets a warm reception.

QUILL.exe: Transmissions from the Black was written as part of National Game Design Month 2020.

In order to download this game supplement you must purchase it at or above the minimum price of $1 USD. You will get access to the following files:

Support this game supplement at or above a special price point to receive something exclusive.

Need to be cut some financial slack? Take a free community copy. Please consider rating and reviewing the supplement if you do.

Quill.exe is a supplement for the letter-writing rpg, Quill.

Quill.exe is 23 pages, with a readable layout and some helpful graphics. The cover feels a little cluttered / not centered, but the mechanics beneath are super cool.

You do need Quill core to play this, but it's pay-what-you-want on drivethru, and there's a link to it on the page above. If you have Coal And Parchment, you can also use that here, and a link to where you can pick it up is given in the pdf.

Settingwise, in Quill.exe, you play as someone aboard a cryo ship in the far future, communicating via relay beacon with others. It's hard-fi, but it isn't unapproachable.

Exe gives you a variety of character classes to choose from, and the flavor behind each is nice. Probably the most interesting of the batch is the Stowaway, who has a heck of an automatic hook, but the other classes feel solid too.

In addition to character classes and rules conversions, Exe also comes with several scenarios. They each have a unique flavor and variant rules, and feel well-designed to fit the scope of the system.

Overall, if you want to take your game of Quill to a novel and very appropriate hard-fi setting, I'd recommend picking this up.

Alternately, Exe might make for an interesting companion to a game of Alien, as its atmosphere, classes, and mechanics dovetail very well with the setting, and could produce an immersive minigame between sessions. 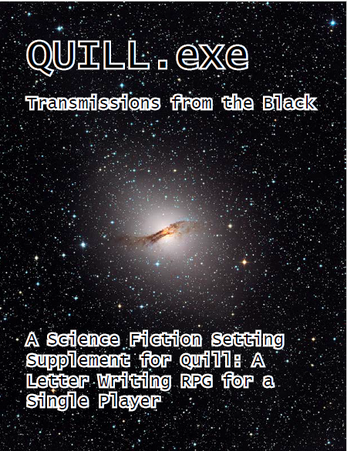